Those who think fish are boring pets are about to change their minds. That’s right. And do you know why? Because a Japanese company has just created a unique container , able to help owners take their fish for a walk. The product, whose shape resembles that of a container, allows the animal to be relocated without causing damage.

Known as the katsugyo bag, the portable aquarium is a long tube with a transparent middle section, a handle and a gauge that monitors the oxygen saturation of the water. The product, according to information compiled by the Odditycentral news portal, was developed by the company “Ma Corporation” and aims to become a more elegant, efficient and ecologically correct alternative to the plastic bags used for transporting fish.

As something new, the katsugyo bag continues to be tested. Therefore, it is not yet known when the product will be available on the market. Those involved in the preparation of the container still need to carry out further analysis to ensure its fairness. All work is being documented on Instagram.

Judging by the photos and videos of the portable aquarium that have been posted on Instagram since October last year, the peculiar container is still evolving. Compared to previous versions, the new prototypes, in addition to the oxygen meter, also have a mechanism that facilitates feeding the fish that will be transported in the future.

The inventors of the katsugyo bag are also experimenting with various species of fish. In this part of the process, experts want to know which species will adapt better to the new environment – ​​for those involved, so far, mackerel, a species of fish that is used to moving around more in an aquatic environment, is one of the fish that may not suit the aquarium. 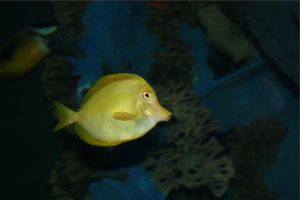 Comments posted on most Instagram uploads point out that the katsugyo bag can be a hit in the commercial sector – not just in Japan, but in many other regions as well. Many of the users of the social network in question show a certain curiosity about the product. The most common questions in publications involve cost and sales locations. Generally speaking, most users seem to support the project.

Although the katsugyo bag is being developed to fulfill the functionality of a portable pet fish tank, news portal Odditycentral has revealed that the container can be used by those who are sashimi fans – after all, the product ensures that the favorite food of the fans of Japanese cuisine are as fresh as possible.

We all know that it is extremely common to find stressed fish in many aquariums. For the Agrosete portal, this stress – which is any condition that influences the normal physiological state of the fish -, in most cases, is the result of the aquarist’s lack of knowledge.

Therefore, when the above product is available on the market, it is necessary to be aware of certain circumstances. One of the factors that must be taken into account is the quality of the water . According to the Agrosete portal, if the water is outside the essential parameters of pH and temperature, or contains toxic substances such as ammonia, nitrite and nitrate, fish can trigger waves of stress.

In the meantime, it is also important to emphasize the issue of management, which should be as careful as possible. The way the animal is transported must involve great caution, calm and tranquility, as excessive movement will certainly trigger stress on the animal.

August 5, 2021By editor Pet FishLeave a Comment
Serach Here
About Us

We can help you with many media and entertainment rights topics or advise you on broadcasting regulations, for both linear and non-linear television services. Whether you have regulatory questions about content, advertising campaigns or the use of the delivery infrastructure, we can advise and help you analyze your legal situation.